Finance chiefs continue to play a critical role in shepherding their organisations through the global economic crisis, a recent survey shows how.

Strategic CFOs have demonstrated the ability to provide forecast models based on different scenarios, to adjust and adapt, to make informed decisions, and ultimately to lead their companies past the worst of COVID-19 and into the recovery period. Leading finance chiefs showed their companies how to adapt, transform, and sustain performance going forward.

Overwhelmingly, the surveyed finance executives portrayed their chief financial officers and finance teams as rising to the task across the domains of strategic leadership, planning and analysis, use of technology and automation, and identifying risks. More than nine out of every 10 of the survey respondents said their CFO and finance functions:

CFOs needed to adapt to remote workforces, cultural changes, and talent challenges. The survey data suggested that leading CFOs were prepared with automation-assisted support and reacted quickly by revising priorities, facilitating processes remotely, and preserving talent and culture in their teams. 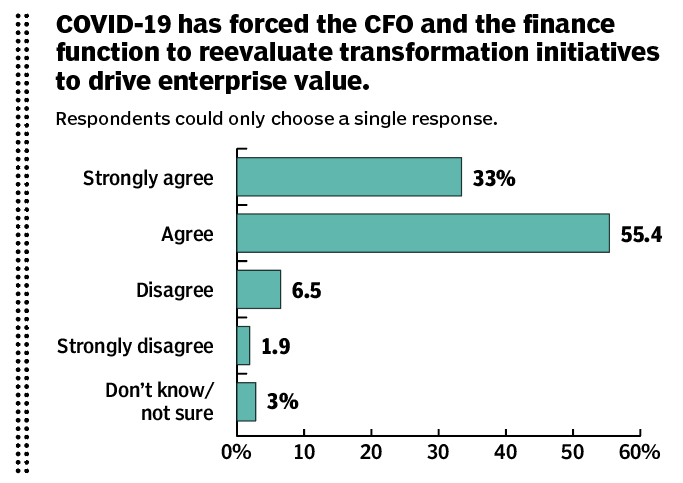 The most immediate priority for the CFO and finance function in response to the coronavirus pandemic was to enable a remote workforce, according to the survey. Forty-three percent of the survey respondents said their finance teams adopted a remote workforce model, with an additional 28% working mostly remotely, and 14% working partially remotely but mainly in an office.

The issues that the newly forged remote finance workforces had to contend with were wide-ranging. More than 40% of the surveyed executives said the pandemic had a significant impact on cost management, financial planning and analysis, and budgeting and forecasting. And more than one-third of the survey respondents said that risk management, treasury and working capital management, technology adoption, and accounting and financial reporting were significantly impacted.

While CFOs have made advancements in robotic process automation (RPA) for the finance function, there are still opportunities to improve. Most CFOs have started to adopt automation. More than three-quarters (77%) of the survey respondents said that at least 1 in 20 members of their finance team were “virtual,” meaning they were using RPA and other automation capabilities.

But only 27% said that at least one in five members of their finance team were virtual, which suggests that automation has not reached its full potential in most organisations. Eliminating and automating manual processes was a high priority or critical priority for 52% of the surveyed executives.

The survey results showed that BPO is still going strong despite the impact of automation on the scope of work outsourced. The finance function delivered most of its services through BPO for 25% of the survey respondents, compared with 22% mostly through global business services (GBS), 18% primarily through captured shared services, and 23% through hybrid models. 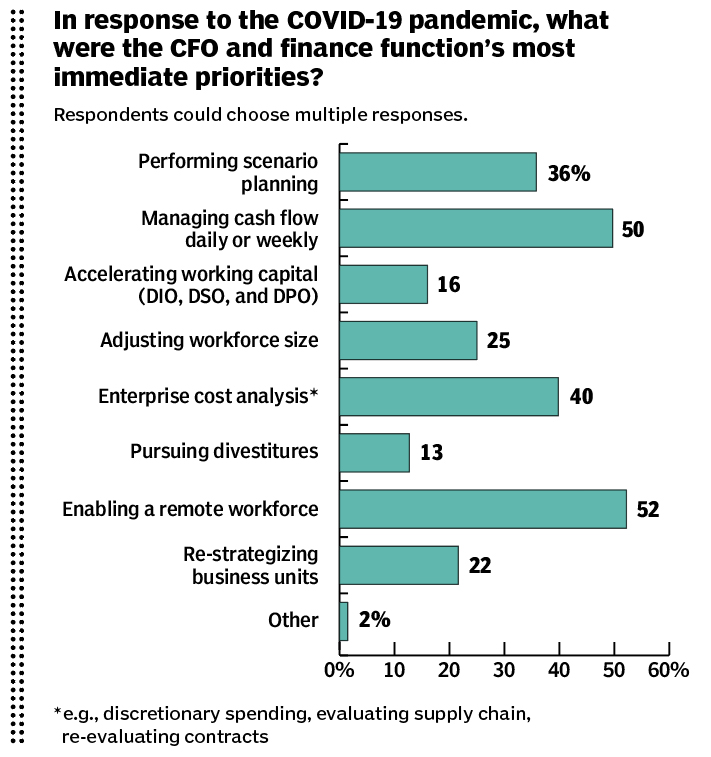 GBS adoption by organisations was being led by CFOs and finance. Finance was overwhelmingly the most included function for GBS service delivery, with 86% of the GBS organisations including it. IT was the second-most included function, at 35%, followed closely by human resources and procurement, at 33% and 32%, respectively. Most of the GBS organizations represented in the survey, 55%, reported to the CFO.

Cost containment is still a dominant concern for CFOs. Almost one-third of the surveyed executives said they planned to increase the use of either captive shared services, BPO, GBS, or a hybrid model to leverage their variable cost models in this uncertain business climate.

About two-thirds of the surveyed executives defined the current role of their CFO as a finance and accounting leader. Most of the survey respondents also selected an additional role for their CFO, split nearly evenly between three types: an efficiency and effectiveness driver, a business partner and adviser, and an enterprise value creator and organisational leader.

The survey indicated that the enterprise value creator role was an expanding one for CFOs. Eighty-nine percent of the surveyed executives said that the CFO and finance function had the talent and skills to drive enterprise value for the organisation.

In the short term, CFOs showed their companies how to sustain their businesses through the initial stages of the pandemic. Over the long term, CFOs will look to transformation initiatives to sustain cost savings. Sixty-four percent of the surveyed executives said that improving planning, scenario modeling, and forecasting was a high or critical priority for the CFO and finance function over the next 12 to 18 months.

This site uses cookies to store information on your computer

This website uses cookies to improve your experience while you navigate through the website. Out of these, the cookies that are categorized as necessary are stored on your browser as they are essential for the working of basic functionalities of the website. We also use third-party cookies that help us analyze and understand how you use this website. These cookies will be stored in your browser only with your consent. You also have the option to opt-out of these cookies. But opting out of some of these cookies may affect your browsing experience.
Necessary Always Enabled
Necessary cookies are absolutely essential for the website to function properly. These cookies ensure basic functionalities and security features of the website, anonymously.
Functional
Functional cookies help to perform certain functionalities like sharing the content of the website on social media platforms, collect feedbacks, and other third-party features.
Performance
Performance cookies are used to understand and analyze the key performance indexes of the website which helps in delivering a better user experience for the visitors.
Analytics
Analytical cookies are used to understand how visitors interact with the website. These cookies help provide information on metrics the number of visitors, bounce rate, traffic source, etc.
Advertisement
Advertisement cookies are used to provide visitors with relevant ads and marketing campaigns. These cookies track visitors across websites and collect information to provide customized ads.
Others
Other uncategorized cookies are those that are being analyzed and have not been classified into a category as yet.
Save & Accept